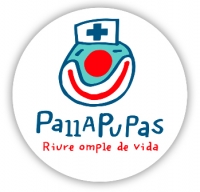 Donate
Your contribution has tax benefits of up to 80%

What is, “Un Cami de Nassos” {A Path of Noses in Catalan}?

It is a solidary initiative to help the NGO Pallapupas Pallassos d’Hospital, which consists in doing the “Camino de Santiago” {Path of Santiago} wearing a clown’s nose, while attempting to gather donations and explaining the work that the same NGO carries out. This initiative was begun in April 2014, when we initiated the “Camino Frances” {French Path} from “Roncesvalles.” Every year we do 3-4 different stages, at the pace of a snail, yet fulfilling our purpose: to enjoy, interact, and smile. Every year we resume the “Camino” {path} at the same point where we had left off the year before. We have thus far created six virtual donation pools {one for each year since 2014} already closed, amounting to the magical sum of 5,356 euros, of which below we will now go on to describe.

The donation pool of the first year, the year 2014: we walked from “Roncesvalles” to “Puente de la Reina” {Queen’s Bridge} {traveling through the autonomous community of Navarre) where we traveled with Mar, Susanna, Ani and Jorge, and our friends Jose Vasquez and Luis who surprised us with a breakfast and a visit to “San Esteban de Zabaldika.” Thanks to this action we collected 241 euros.

The donation pool of the second year, the year 2015: we walked from “Puente de la Reina” {Queen’s Bridge} to “Logroño.” This path was more solitary than that of the year before, but it helped us to strengthen our relationship, collecting 375 euros.

The donation pool of the third year, the year 2016: we walked from “Logroño” to

“Santo Domingo de la Calzada,” where we encountered welcoming hosts like Yuta and Aitos de Ventosa, or Angel de Azofra, among many other people that helped us collect 456 euros.

The donation pool of the fourth year, the year 2017: we united the populations of “Santo Domingo de la Calzada” and “Burgos” with the news that on this occasion we would amplify the group thanks to the addition of Pepe and Mariano. Once we arrived at the Burgalese capital, the first “Narices” {noses} raffle took place. All of these initiatives allowed us to gather a whole figure of 600 euros.

The donation pool of the fifth year, the year 2018: we broke, by a large margin, the figure of 1,000 euros. On this occasion we walked from “Burgos” to “Carrion de los Condes,” province of “Palencia.” This time we want to tell you that the last day we met Nancy, a “HospitalClown” from Boston. We finally collected 1,676 euros.

The donation pool of the sixth year, the year 2019: This occasion was the first on which we counted with a car for support where Lucia and Espe were following our steps with Simba [SEAT Lion}. We walked from “Carrión de los Condes” to “León,” where the third edition of the “Narices” {noses} raffle took place. That year we also sold the “CookiesNassos,” cookies with our logo, and carried out a special raffle during Christmas. Once more, we surpassed the benchmark figure of the number of donors, permitting us to arrive at the miraculous number of 2,007 euros.

This year you can follow us through social media with these tags: